Well,  my classes in metalsmithing are long over and I had to  take the push to do some things on my own,  without the guidance of my teacher, Jolan.  My first step in that direction was the ring for my friend, Jeanne.   Then my daughter got me started again because she wanted a layered metal pendant... and she wanted me to teach her!   I was very intimidated, because I don't feel I am ready to teach anyone something I only just learned myself.  But I pushed onward and it was a great bonding time for mother and daughter.  She is already creative by nature and a quick learner.  So I had her come up with a design and showed her how to use a saw.  What a trooper she was - she cut out her design, breaking only one blade.  My first time sawing was awful, sawing lots of "wood" on the block and I know I went through more than one blade.  So now I am feeling a bit more intimidated, but VERY proud of my daughter.  Here is her finished pendant. 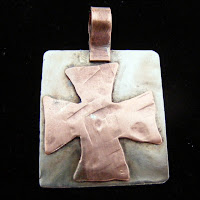 We then went to work on her cross pendant, cleaning, filing, sweat soldering, more cleaning and filing, and voila!  A beautiful pendant.  Being the perfectionist that she is, she was not happy that the cross was not perfectly square on the backing, but I told her that is often the nature of handmade - it does not have to be perfect!  The only thing she did not have a hand in was the soldering, but that will change with the next project - her own layered ring.  She has already cut out her pieces to go on top of the band.  She created her own pattern using texturing scissors, cutting out pattern on heavy paper.  She traced it onto onion skin paper which was glued onto the metal for sawing.  She did a great job sawing out the pattern.  We are awaiting more metal sheet so we can finish up the ring.  I will post a picture when it's completed.  In the meantime, is a picture of the copper elements we are using.  More later!  Anita 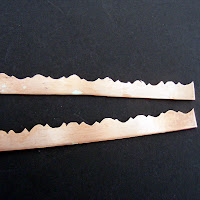 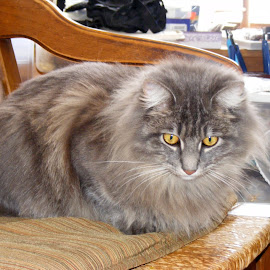